The San Diego Chapter of the Fulbright Association is pleased to present a special virtual roundtable discussion on contemporary border issues featuring acclaimed Mexican and U.S. border journalists and scholars. The Mexico-US border region, long a site of cross-cultural creativity and conflict, is today a hotspot where international and national issues are mixing in volatile, unpredictable ways. 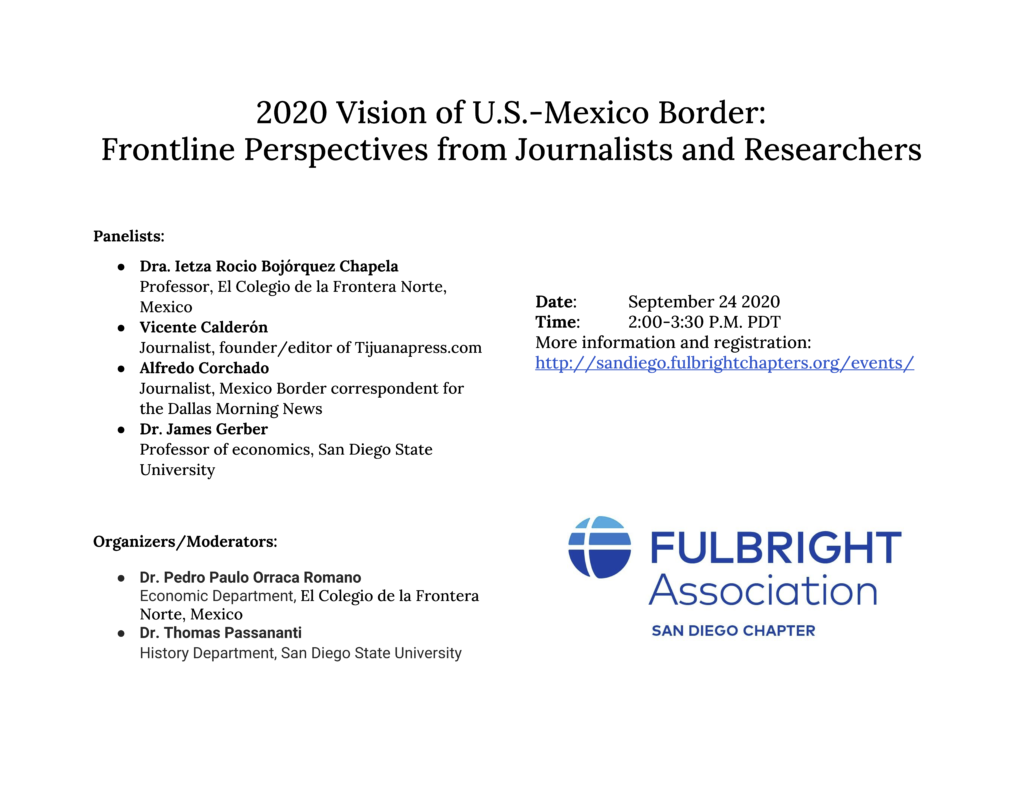 The San Diego Chapter of the Fulbright Association is pleased to sponsor this important panel of distinguished journalists and scholars who will increase our understanding of pressing U.S. Mexico border issues confronting our San Diego region. The event is part of our effort to make our Chapter a true cross-border one that acknowledges how the international border sometime masks how the San Diego region is currently and historically interdependent, both culturally, economically, educationally and socially. 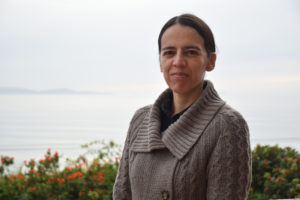 Dr. Bojorquez is an epidemiologist and a public health specialist. Her main research interest is on the social determinants of health, in the areas of mental health, health-related practices (diet, physical activity) and migrant health.

After graduating from medical school, she worked in health promotion in rural areas in Mexico. From 2007 to 2010 she was Deputy Director of Operations Research in Mexico’s Ministry of Health. From 2010 on, she has been a professor-researcher at the Department of Population Studies, El Colegio de la Frontera Norte, Mexico, where she is currently in charge of the Surveys of Migration in Mexico’s Borders (EMIF).

Her recent research projects include “Prevalence and factors associated with SARS-CoV-2 infection, HIV and latent tuberculosis, among migrants in Tijuana, Mexico”, “Mental health and trajectories of reintegration of young return migrants”, “Public spaces and physical activity in cities in Northern Mexico”, “Feasibility study of a cellphone-based intervention to promote mental health among deported migrants”, and “Participatory Development of a Health Promotion Intervention to Improve Healthy Eating and Physical Activity Practices in an Underserved Community”. 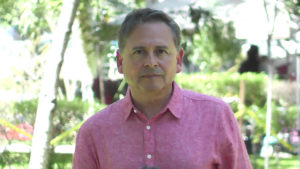 With more than 30 years practicing journalism on both sides of the Mexico-U.S border, Vicente Calderón has a unique perspective on the dynamic and complex border region.

Today we talk about the new phenomenon of “All Terrain” reporters, but Calderón has a long career that has evolved with the development of multimedia platforms.

Calderón started in radio in Tijuana and has accumulated experience and knowledge in Los Angeles as a TV news anchor as well as in San Diego, California, and Tijuana, Mexico, first as a reporter and today as editor of Tijuana’s first online news site, Tijuanapress.com.  Tijuanapress.com is dedicated to the professional training and development of journalists and to the promotion and defense of freedom of expression on both sides of the border.

He has developed news in English and Spanish, producing for CBS News and ITN of England or Al Jazeera America, as well serving as a correspondent for mexican national media such as Milenio TV.

Calderón help launch Newsweek en Español Baja California as editorial coordinator.  He left  that post in May 2018 due to a renewed interest from several international media outlets on stories about Tijuana and an increased demand of Tijuanapress.com services.

Vicente Calderon is a graduate of the School of clinical Psychology of CETYS Universidad from Tijuana, Mexico. 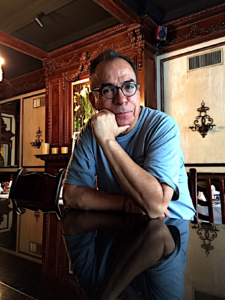 Alfredo Corchado is the Mexico Border correspondent for the Dallas Morning News and author of Midnight in Mexico: A Reporter’s Journey Through a Country’s Descent into Darkness. Born in Durango, Mexico, he was raised in California and Texas. He worked the fields of California’s San Joaquin Valley alongside his parents who were members of the United Farm Workers union led by Cesar Chavez. Corchado began his career in journalism at the El Paso Herald-Post, before working for the Wall Street Journal in 1987. He is a 2009 Nieman at Harvard and also a fellow at Woodrow Wilson, Rockefeller, Lannan, USMEX and IOP. He is a recipient of the Maria Moors Cabot Prize from Columbia University in 2007.

In 2009, he received the Elijah Parish Lovejoy Award for Courage in Journalism from Colby College. He has reported on the reach of Mexican drug cartels into the United States, the plight of Mexican and Central American immigrants in the U.S. and government corruption on both sides of the border and debate about immigration. The former director of the Borderlands Program at the Walter Cronkite School of Journalism at Arizona State University, Corchado was also inducted into the Texas Institute of Letters in 2018. He was named 2020 Justice Media Trailblazer by John Jay College and Texas’ Star Reporter of Year. 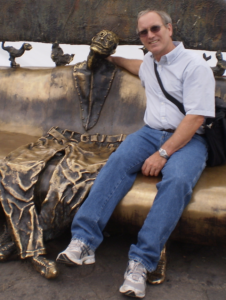 Dr. James Gerber is retired from San Diego State University where he taught economics for 34 years.  He successfully served as SDSU’s Director of the Center for Latin American Studies (2002-2009) and obtained federal grants designating it as a National Resource Center for Latin America.  Among his other works, he is the author of the widely used textbook International Economics and co-author of the economic history Fifty Years of Change on the US-Mexico Border.  His recent book, A Great Deal of Ruin:  Financial Crises since 1929 was published by Cambridge University Press in 2019.  He has been a visiting professor in universities in Canada and Mexico.